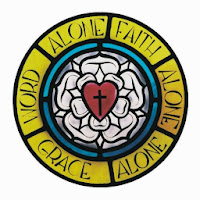 ~ Today is Reformation Sunday, marking the beginning of the Protestant Reformation and the rediscovery of key biblical truths by Martin Luther. Even the LA Times is taking note of the occasion this year.

Some of my first year students at PIBC perked up when I mentioned Martin Luther in class. So, I probed deeper. "You know Martin Luther's contribution?"

Oh well, I once ran into a pastor on Guam who was unfamiliar with the Lutheran Church and wanted to know if it was one of the new charismatic movements.

Yes, we sang "A Mighty Fortress Is our God" at the Lutheran Church of Guam this morning -- even at the "contemporary" service. Then someone wanted to sing it at the PIBC prayer meeting tonight. I guess none of our Baptists had been given a chance to sing it in the morning. 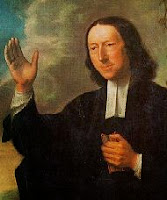 ~ What would John Wesley say about the Emerging Church? Keith Drury thinks he knows.

~ "Chopper rescues 5 stranded at Cetti Bay" -- another one of Pastor Jeff's boonie stomps yesterday -- but it wasn't his fault. I think it was really an ingenious ploy to get a ride in the Navy rescue helicopter that patrols around Guam. No one got hurt -- but there were a few people in worship this morning covered with sword grass cuts.

~ I'm leaving Tuesday morning for a trip to the States. First stop will be SoCal to see Kent for a day or two. Then I'm off to Phoenix to see my parents. Next Sunday I meet up with Dave in Houston and we fly to Atlanta, rent a car and drive to Columbia, South Carolina to recruit teachers at Columbia International University. (They have an MA in TEFL/Intercultural Studies.) Then we drive back to Atlanta for the TRACS meeting. After that I fly to Northern California to see Kirk and Betsy. Then home to Guam again.

The classroom portion of my World Religions class is over tomorrow night. Melissa will cover my Spiritual Formation class while I'm gone.
Posted by Brad Boydston at 10/28/2007