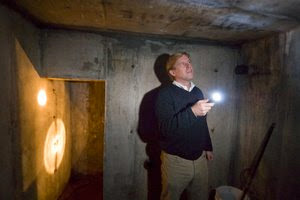 • Scot Simpson wants to get rid of the bomb shelter he discovered buried in his new Charlotte, North Carolina backyard. -- Link

Hey, don't be too hasty, Scot -- it might still come in handy. Cuba isn't completely reformed, yet. And think of all of the other possible uses -- personal prison, mushroom gardening, potato cellar, rec room, bedroom for a 14-year-old son, summer retreat from the humidity...

• General rule of thumb: the longer it takes to introduce a speaker the less substance there is to his speech.

• Cheryl has a part-time job at the Guam United Methodist Church as the church secretary. They have a hard time getting the search engines to pull their website up so I'm creating a few links here and there to get the spiders moving their direction.

• The ultraportable Linux-running Asus Eee PC illustrates why falling flash prices could give Microsoft a run for their money.

I played a little with an Asus Eee a few weeks ago. The keyboard is small and the screen isn't up to contemporary standards -- but I still like it -- a lot of bang for the buck. You can get this fully functional "laptop" for about $300. I'm predicting that they'll gain a cult following similar to what happened with the Palms when they first came out.

• Iran has expelled a Swedish diplomat. Finally, some country (other than Denmark) has recognized just how imperialistic and dangerous those Swedes are! -- Link
Posted by Brad Boydston at 3/06/2008