~ Martin Marty speaking at North Park University on the benefit of fostering a culture where religious pluralism thrives: "People are more vitally engaged in a faith that they choose than they are if they passively accepted the faith handed down to them... Freedom of religion is the great gift Americans gave to each other."

IOW, even though we don't necessarily appreciate the competition, in the competitive environment, those who choose a certain faith do so with more conviction.

~ Wal-Mart -- "Always Low Prices" "Save More. Live Better." Or is it "Save Money. Live Better."? They better figure it out before they start printing the banners.

~ Marketing big-name MBA programs to liberal-arts undergrad students -- deferred admission and job placement. I'd like to see an MFA program geared toward business undergrads. That would be a little more out of the box.

~ I took the online eschatology quiz and came out as a solid amillenialist. No surprise there -- although there are days when I'd probably come out as premil (but not pre-trib) -- the line between the two can at times be fuzzy. No, the quiz didn't have a pan-mil category. And I don't want to hear another person tell me that they're pan-mil -- that "it will all pan out in the end." That's too quick of a way out of the discussion. Everyone with any sense about them is pan-mil -- realizing that we hold all eschatological systems lightly because we know that by definition, as fallen humans in the story, we're not going to get all the details right -- especially when dealing with something as wild as apocalyptic language. So hopefully you're pan-mil in addition to being amil or premil or postmil or... 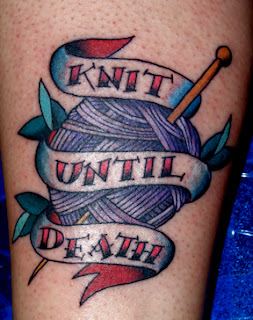 ~ Newsweek: "Tattoos and Knitting: Both are discernible microtrends in America, says pollster Mark Penn. And they contain powerful clues to what’s happening in society."

Ah -- that we've suddenly got this thing about needles?

~ Kent Anderson wants to know why the president of the Covenant needs to be a clergyperson. See my response in the comments of his post.

~ For the reading list, Ben Witherington's new book Making a Meal of It: Rethinking the Theology of the Lord's Supper: In this study I argue that the Lord's Supper was originally part of a large meal, not a separate ritual or ceremony, and as such brought into play all the ancient understandings about hospitality, the welcoming of people to the table, and the like. I am also arguing that the early church did not see the Lord's Supper as merely a symbolic memorial ceremony. They actually saw some sort of spiritual transaction happening in the partaking of the Lord's Supper...