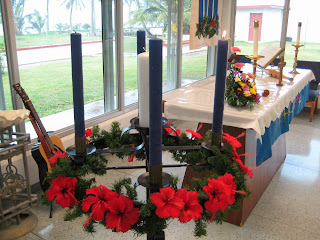 Today is the first of the four Sundays in the season of Advent, and thus the first day of the church year.

Pictured to the right is the fresh hibiscus-lined Advent wreath at the Lutheran Church of Guam this morning. Pictured below, Pastor Jeff Johnson explains the wreath to the children as the first candle is lit.

The origins of the Advent wreath tradition are unknown and they vary from place to place and group to group. However, the basic idea is that each Sunday during the season one additional candle is lit during worship -- until Christmas, when the white candle in the center is lit.

The four candles on this wreath are "royal blue." 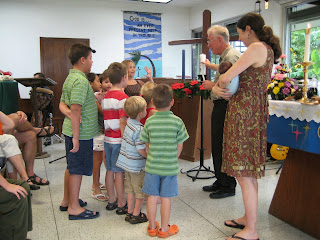 Lutherans from the US tend to use blue candles -- highlighting Jesus' royalty.

I understand that some churches in Australia and the UK use red candles -- symbolizing God's love. It is also common in some US churches to use white candles.

I've even seen an American church use yellow candles -- I suppose, to match the unique color scheme in their building.

However, the most common color combination amongst the churches around the world which use Advent wreathes (not all do) involves purple and pink candles. On most Sundays the candles are purple. But on the third Sunday during Advent the candle is pink (or "rose"). Purple is said to be the color of royalty and penitence -- dual themes during Advent. The pink candle on the third Sunday is a reminder that preparing for Jesus' coming isn't all about repentance but it is also a time of joyous anticipation.

The color of the candles (or even if you use a wreath) isn't nearly as important as the belief that all Christian share in common -- in Jesus God came to live among us and share in our humanity. However, he not only came, but he is also coming again in order to wrap up what he began at his first coming. Advent means "coming."
Posted by Brad Boydston at 12/01/2007