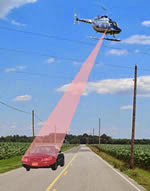 ~ What will this do to Southern California television, where they regularly break in to scheduled programing to show live freeway chases? Eureka Aerospace of Pasadena, California, has developed for the law enforcement market an electromagnetic system that uses microwaves to disable a car’s engine from a distance. -- Link

I love car chases in the movies -- but only in the movies. So, this innovation has my vote. Although, I'd hate to be in a helicopter that's generating such a signal.

~ The impact of Home Depot on Guam's economy -- Link

This afternoon I went to Benson's (now Guam's second largest hardware store -- known for narrow aisles and dim lighting) and it seemed as busy as pre-Home Depot days. Like before I couldn't find what I needed. But that was true at Home Depot, too.

I'm suspecting that Home Depot's presence will have a positive impact on all the stores that seriously attempt to compete. I'm guessing that there is a lot more home improvement going on than ever before. Before Home Depot people didn't really think in those terms -- at least not on the same level. The new store just raised the bar for what passes as livable. And that upward movement will create opportunities for others as well.

"Unfortunately we really haven't attracted the young heavy metal crowd that we though we would get" said Märrïs. "What we have attracted is more Scandinavians, which we're really not equipped to minister to here since no one here speaks a Scandinavian language. Last week we had three couples show up from Finland, one from Sweden and a guy from Denmark, all thinking we were some kind of special Scandinavian church. When we told them what we were doing they didn't seem to understand."

This is almost close enough to reality to be believable. These guys crack me.