~ Guam will have yet another dining option -- Ruby Tuesdays opens Tuesday -- tomorrow. No food shortages here.

~ Some people (both mainlanders and locals) complain about the high cost of food on Guam -- and it is generally a little more expensive than the mainland US. But there are lots of bargain options. We buy day-old bread at Crown Bakery for $1/loaf (good bread that was $3-4 loaf the night before), shop the bargain cart at PayLess Markets, and buy off the value menu at Wendy's (which is sometimes cheaper than the same item in California because the price on the menu here includes the tax).

We've also found that there are bargains in unexpected places like the ubiquitous neighborhood grocery stores -- most of which seem to be run by Koreans. A 20 oz. plastic bottle of Diet Coke at the Hans market near campus is $1 (including tax). I think we were paying $1.20+ tax for that same item at the Wal-Mart in California before we left.

We're not suffering too much. 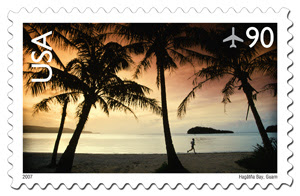 ~ Recently a lot of the mail that we've received from the mainland US has come with the 90¢ airmail postage. At first we thought that it was because people liked the idea of sending a stamp with a picture taken on Guam to Guam -- but eventually we realized that it must be that people think the letter will get here faster by airmail. However, the fact is that all first class mail to Guam from the mainland comes by air -- even if it only has a 41¢ stamp on it. So save your Guam stamp -- maybe buy a little frame -- hang it on your wall -- just being silly. But the sunsets here are beautiful.

~ However, not everything in paradise is copacetic. The FBI is investigating Ginger Crunden Cruz, who spentGovGuam money defending herself in court when she was the official spokeswoman for a former governor. Apparently she had been accused, among other things, of putting hexes on other employees. Link
Posted by Brad Boydston at 12/17/2007