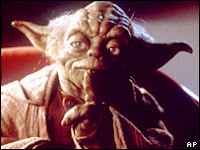 ~ Coming soon to the UK -- Church of the Jedi, featuring meditation, sermons about Jedi beliefs, and light saber training. They're not the first such ecclesial body. -- Link

~ Coming soon to Guam -- Chinese tourists. It will be interesting to see if this development affects Japanese tourism on the island. -- Link

~ Have any of you tried the MagicJack USB phone system yet? It's getting a lot of grassroots attention. I'm wondering if they'll be able to keep up with it all. Are they positioning themselves to be purchased by Google or will they be the next Google-like phenomena? -- Link

~ Scot McKnight's Hermeneutics Quiz is stirring the waters. -- Link -- I'd take it myself except that my winter issue of Leadership Journal probably won't arrive until sometime in the spring (the fall issue arrived a couple of weeks ago). Certain types of mail get routed to Guam on the slow boat that probably stops in China first. For some things you'd get faster delivery in some third world countries.

~ An agricultural university in Sweden has received a $560,000 (USD) grant to conduct research into burping bovines, how they might be contributing to global warming, and what we can do about it. -- Link

~ Just when you thought retirement sounded good -- "Boomers will live two, perhaps three decades beyond the traditional retirement age of 65, much longer than generations past. They will be able to find work more easily during the so-called third phase of their lives as there will be more jobs than workers." -- Link

I'm thinking that I might become a blogger for my third phase career -- although I have quite a few years before I hit 65 (I'm a later Boomer). And who knows, by then blogs might have gone the way of CB radios (I may still have one of those in a box somewhere).

~ Will aging Boomers HAVE TO go back to work as their benefits run-out because of their extended life spans? -- Link

~ The Institute of Theology by Extension has received DETC accreditation. -- Link
Posted by Brad Boydston at 1/22/2008

sp tight to have found this blogsite, I used to live in Guam for 13 years of my life... my family is still there too.

re: Church of the Jedi, wasn't it Chesterton who said something like "when you cease to worship God, you don't worship 'nothing,' you just end up worshiping everything"?