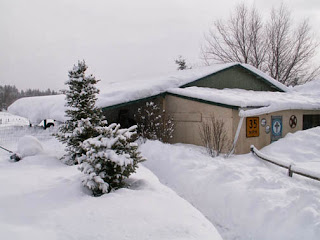 Happy birthday to my brother Greg, who will, I'm sure, be spending his day shoveling snow. The picture is of the back of his North Idaho home yesterday.

Of course, he actually likes that sort of thing. He apparently inherited the recessive cold-and-snow-preference gene in the Boydston clan. It pops up once every fifth generation or so.

In his honor Cheryl and I went snorkeling at Ypao this afternoon. We went at high tide -- saw lots of fish -- clear water -- sunny -- not too choppy. While we enjoyed snorkeling in Australia last month we really like snorkeling on Guam. The island is surrounded by a reef so it's pretty protected out there -- and not much worry over sharks or other nasty sea monsters. And we can drive to Ypao, swim for half an hour -- minimizing exposure to the sun -- and be back home -- all in less than an hour. 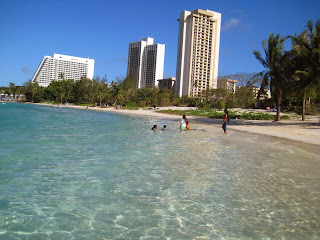 Ypao is a great place for the casual snorkeler, too. It's never really crowded, plenty of parking, and it's a mix of locals, Micronesians, tourists, and military people -- all well-behaved friendlies -- lots of children. And it's far enough away from the sewage treatment plant that you don't have to worry about that. (Yes, Guam does have infrastructure issues.)

So it was a beautiful day out there. I'm sure that Punxsutawney Phil (or his isla cousin) saw his shadow when he popped out on Guam. Unfortunately he's still trying to dig his way out in Idaho (and a few other mainland places) so he can have a look-see. I doubt that he's having much luck.
Posted by Brad Boydston at 2/01/2008