~ Health and good fortune to you this new year! 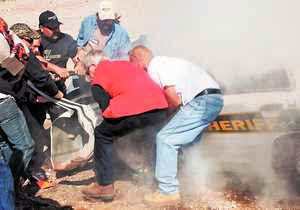 ~ In Tucson, Arizona an unconscious deputy sheriff was pinned in his burning patrol car. Nine bystanders braved the fire -- flipped the car over, pried open the door, cut him out of his seat-belt, and dragged him to safety. Heroes.

The deputy had been responding to another accident with his lights and siren active, when he was hit by an 87-year-old man driving a pick-up truck. Somebody remind me if I get to be 87 that I should probably not be driving. I'll be the guy who doesn't want to give it up. -- Link

~ What would the White House look like if it were redesigned for today's needs and security challenges? They're having a contest. -- Link (via)

~ Another contest -- the Emergent Village is sponsoring an "atonement metaphors contest" -- from a missiological standpoint this is an exercise in contextualization. Missionaries are constantly engaging the culture in this way.

However, it's not exactly clear what the prize is (it is, after, all a "contest") nor when the deadline is. The whole thing has a bit of an ad hoc feel to it -- but it sounds worth the while. I'd like some of our students to give it a shot. -- the details that have been released

~ Union University in Jackson, Tennessee, is using blogger to communicate with their constituency in the wake of the tornado that ripped their campus apart and sent 51 students to the hospital. Someone is thinking on their feet. -- Link

Is that for real? I'm sure Exxon Mobil, which is an unbelievably large company, pays a lot in taxes -- and that they don't get enough social credit for what they do -- but intuitively this statement seems implausible. The blogosphere is having a grand time deconstructing the assertion by economist Mark Perry.
Posted by Brad Boydston at 2/07/2008