An article in Barron's is suggesting that Guam might be a great place for value-conscious Americans to retire. 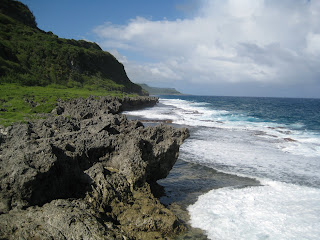 I do love Guam! It is beautiful and has a lot to offer -- especially the terrific fusion of cultures. Also, land is relatively cheap; the American flag flies high; English is the primary language; there is US postal and banking; the ocean views are spectacular; the clouds are usually eye catching; the sunsets are gorgeous, and you don't have to worry about slipping on the ice.

There are calamansis, bananas, mangoes, coconuts, and papayas. The bread fruit trees are striking and the flame trees are stunning.

Snorkelers have quick and easy access to beautiful tropical fish in the protected waters of the reefs. The beaches are uncrowded.

Everything you've heard about bugs and snakes is way overstated. The brown tree snakes rarely bother anyone -- except the birds -- which are not abundant because the snakes eat the eggs. The snakes do at times short-out the power as they crawl over the transmission lines.

The termites can be more-or-less controlled -- except on the rare occasions when they swarm -- and that's just a minor nuisance.
I received more mosquito bites during our week in Wisconsin this past summer than during the whole two years we've lived on Guam.

So don't let the critters deter you from visiting Guam. It's a great place!
I am, however, having a hard time picturing Guam as a retirement destination.

As a citizen and registered voter I don't mind mentioning that the island is also a pretty quirky place. We have a totally dysfunctional territorial government that is perhaps best described as third world -- with a thin and spotty veneer of America painted over it, a hospital which can't qualify for accreditation, a shortage of medical spcialists, a chaotic architectural landscape which matches some urban ghettos in the US, lots of unkempt lots filled with unsightly trash piles, the scent of the neighbors' burning garbage, boonie cars and white trash abandoned along the roadsides, dirty electricity (which goes off way too frequently), typhoons, free-roaming chickens (including roosters which crow 24-7), a fairly high cost of living, and an insular outlook on the world.

People more or less know that there is a problem. But there is some kind of cultural inertia which prevents Guam from taking significant steps to deal with the real issues.
None of this stops me from enjoying Guam or its people. It's a great place for anyone on a mission or an adventure -- or both. I do wonder, though, how many retirees will want to spend their golden years putting up with the nonsense -- probably not many. The locals tend to drift toward the mainland or Hawaii as they get older.