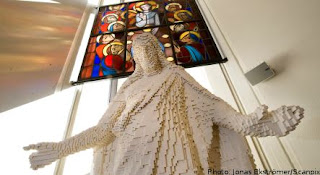 • A Swedish church has unveiled a depiction of Jesus made from Legos. It's probably about as accurate as every other depiction. So, why not? Just don't let a blasphemous 2-year-old near it or there will be Legos to the ends of the earth. ~ link

• I never realized how many personal coaches, internet coaches, entrepreneurs, consultants, and market network trainers existed until they all decided to follow me on Twitter. And why are they all stalking me? Smell of fresh fish? They all seem harmless enough -- just trying to leave their calling cards -- no real spam. But still, is everyone in America a consultant? Who's working? ~ link

• A new study from Ohio State suggests a negative correlation between Facebook use and grades. ~ link

• Cheryl's persistence paid off and she was finally able to book a room for us in Seoul next week. I think we got "no vacancy" replies for the first 5 or 6 places we tried. Thanks to all who suggested hotels and guest houses.

• Now we could use some good news on our condo. ~ link

• I went on a walk through the Micronesia Mall this evening and counted 20 empty store-fronts (not counting all the space on the end where Macy's is reported to be finishing out an addition). 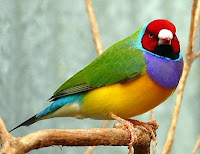 There was one empty food spot. There were three new stores and one that looks like it will open soon. None of the new stores really captured my imagination. We still don't have a regular toy store on Guam.

• We're making a cultural shift into the snarky zone. Is it too snarky to suggest we blame Al Gore for inventing the internet? ~ link

• The Washington Post has taken note of the shortcomings in Guam's infrastructure. ~ link

• New Barna survey: 40% of Americans who self-identify as Christian strongly agreed that Satan "is not a living being but is a symbol of evil." Most do not believe that the Holy Spirit is a living entity. ~ link
Posted by Brad Boydston at 4/12/2009