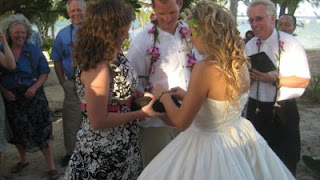 Jack Hanson and Jackie Jensen are now Jack and Jackie Hanson. The beach wedding was this evening out at Jeff's Pirate Cove. I played a little uke, the bride was stunning, and the setting picturesque.

During the middle of the ceremony there was some loud squawking and I thought that perhaps one of the few birds on Guam had found his way to the party. But then it sounded more like a pig and I had a vision of a wild pig or two wandering out of the jungle and making a surprise appearance. I was close -- except that it wasn't a wild pig but a slightly domesticated piglet that had been pressed into service as 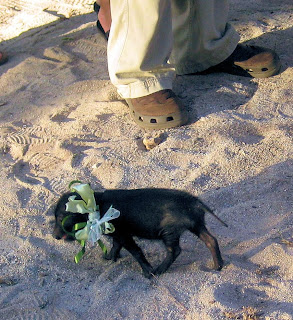 the ring bearer. It made a loud fuss the whole time but they managed to untie the ring which was attached to the cute little beast -- and the ceremony preceded.

That was another first for me.

In the picture to the right Jackie's brother, Adam, is trying to comfort the pig.
Posted by Brad Boydston at 4/04/2009

I don't know Adam from Adam (sorry, couldn't resist), but he must be a great guy to hold the little piggy like that.