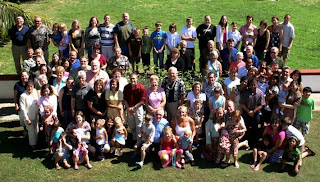 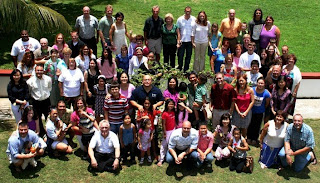 During our time on Guam we've been a part of the Lutheran Church of Guam. LCG is an unusual church in that it is technically an independent Lutheran church but it is sponsored by both the the ELCA and the LCMS -- two American Lutheran bodies which don't always see eye to eye on things. It is also unusual in that the majority of the members had never been "Lutheran" before LCG and would probably not identify themselves as Lutherans. When you throw in the multi-cultural fusion of the islands and the military presence it makes for a very dynamic -- and delightful mix.

Last Sunday we took our annual congregational pictures. There are two congregations -- the 8:30 service congregation and the 11 o'clock service congregation. On any given Sunday each congregation has about 70 people in it -- more or less (attendance is higher on Mother's Day -- and that's probably why we take the pictures then). In someways I see this as nearly the ideal size -- large enough that there is critical mass but small enough that everything can be highly interactive, relational, and flexible.

Over the years I've come to the conclusion that this is a healthy set-up for fostering a mission-focused church. It's by no means the only way of doing things but it is a good way. And as I've been thinking through what I'm hoping we can do as we start developing a new church in Arizona I'm hoping to build on this multiple smaller-size congregations model.

I see this new church as a collection of interconnected congregations -- perhaps of 75-150 people each -- maybe some slightly larger -- some a slightly smaller -- a network. Instead of trying to become bigger the church needs to figure out ways to become more -- to multiply on a regular basis. I can see a church consisting of 10 or even more congregations.

Here is something I wrote on the topic 10 years ago -- updating it slightly as I've found research which supports my thinking. I'm going to eventually tweak it some more but the basic idea remains the same.
Posted by Brad Boydston at 5/13/2009

Neil Cole's book "Organic Church" has some ideas that would correlate to your thinking. There's an amusing illustration where he is headed to a gathering on a Sunday where he sees someone he recognizes. The friend tells him he is headed to another gathering in the neighborhood that Neil didn't even know existed.

Yes, I've read that book. He's a little less structured and more historically disconnected than what I'm comfortable with. I like his mission focus and general approach. Another book along similar lines is Deliberate Simplicity: How the Church Does More by Doing Less by Dave Browning. He's a little bit closer to my thinking.