Our doctor friend Cindy Hoover, who operates out of Mexico, asked a good question of me on Facebook. I had mentioned that we were creating packing lists to keep the US Customs people happy as our stuff is being shipped back to the US. She said, "But why do you have to clear US Customs when Guam is a US territory?" 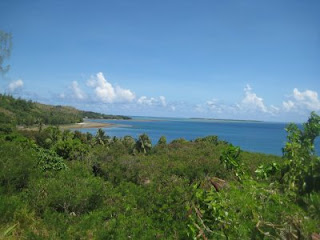 There are things that have entered Guam from Asia and elsewhere which have never cleared US customs (only Guam customs). So when goods and materials enter the US from Guam they have to get a US customs clearance.

Of course, none of this makes a whole lot of sense on any level. But it is seen as temporary until the relationship between the US and Guam can be normalized. However, from my perch it doesn't look like normalization is going to happen under the current leadership. That's mostly because the local people can't agree among themselves as to what normal should look like (commonwealth, US statehood -- with or without the CNMI, independent sovereignty, something like a US Indian reservation...) -- so this imposed patchwork has become the quirky norm.

My sense is that if the locals would speak with a unified voice they'd have enough political clout to solve the problem. I'm hopeful that the younger generation of Chamorro leaders -- those guys now in their 20's and 30's will eventually be able to do an end-run around the political quagmire of Guam and come up with a solution. Otherwise this place will remain in limbo.
Posted by Brad Boydston at 5/30/2009