Our first day in wild Laveen 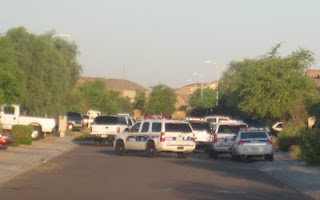 6:30 a.m., first morning in the new house -- a million cops cordon off the street, the SWAT team rolls their tank up to a house about 10 down, and the heavily armed men in black announce over the PA sytem that they're serving a warrant on such-and-such-an-address and that everyone should stay inside and away from their windows.

Actually, I think we're in the perfect spot for salt and light ministry. It's definitely a cross-cultural missionary situation.

The cops opened up the street in plenty of time for the morning commuters. We procured a U-Haul truck to get our stuff out of my brother's garage in Tempe. Then about 4:30 p.m. the "Pack Rat" pod arrived with more stuff from storage. I think we have about an hour's worth of unloading left -- which we'll do in the cool of the morning.

We went out to eat this evening (just after the police helicopter finished circling the neighborhood -- sirens all seemed to be down on Baseline this time) and discovered our new favorite Chinese restaurant. Li's Bowl is at the corner of Southern and 35th Avenues. Interestingly, it is the only non-franchise restaurant we've come across in Laveen. The economics of this place make it very difficult for independent mom and pop businesses to exist. Li's Bowl is not only an exception but they've got a great Chinese fusion menu -- and not at all expensive.