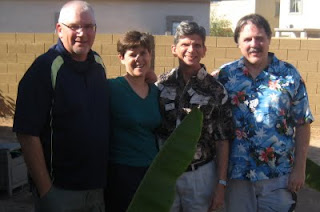 • DAVE Owen and Steve Stinnette, in Phoenix for a couple of days before heading back to Guam, came over for lunch today, along with Matt Augee (who took the picture). Dave and Steve are on the last leg of their five week mainland recruiting and fundraising excursion before returning to PIU on Guam. We ate sandwiches and a good time was had by all. They leave for Guam on Saturday.

• UPWARD mobility in India is leading to a shortage of coconut pickers. Surely someone can come up with a safer and economically feasible way of grabbing coconuts. ~ link

• SEE 3 proposals regarding the future of Arizona ~ link

• SOUTH Korea, which currently exports tangerines to Alaska, Guam, and Saipan, is positioning itself to begin exporting to the US mainland in 2010. ~ link

• IF drafted into the North Korean army you serve for 10 years. Defectors from the military paint a picture of life there. ~ link

• ZONDERVAN has responded to the criticism of Deadly Viper: Character Assassins and has permanently removed the book and related material. There were several Asian-American leaders who felt that Deadly Viper relied too heavily on racial stereotypes. ~ link

• THE Japanese government is trying to get the US to move a Marine airbase off Okinawa to either Iwo To (Iwo Jima) or Guam. The US is already in the process of moving 8,000 Marines and dependents to Guam. I don't think Guam would be too happy with that idea right now. They're already nervous about the impact of the 8,000 Marines. How about Saipan? They could use an economic boost. ~ link
Posted by Brad Boydston at 11/19/2009