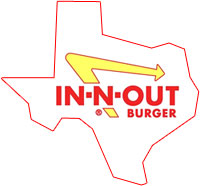 > IN-N-OUT opened two restaurants in Texas this week. More are on the way. In a sense I'm glad that they're getting to enjoy In-N-Out, too. But it doesn't quite feel right. I can picture palm tree lined milkshake cups in Florida but it's a real stretch picturing some dude with boots and a big obnoxious belt buckle in DFW kicking back with a double-double. ~ link

> JUST ASKING -- How much do other counties spend defending themselves against lawsuits generated through the activities of the sheriff's office? I suppose one might argue that it's a small price we pay for the amount of entertainment in our three-ring circus. But some believe that the government probably shouldn't be in the entertainment business. ~ link

> YOU ARE what you speak ~ Audio Interview with Robert Lane Greene, from Economist

> A NEW METHOD of making electricity from sunlight has just been tested. How is it that a bunch of guys in Massachusetts, definitely not a sun-belt state, are coming up with such solar innovation? ~ The Economist

> WHY DID THEY fly the Guam flag on the Space Shuttle Discovery? (I'm still trying to figure out where the flag pole is.) Guam legislators will undoubtedly request compensation from the federal government -- a licensing fee for NASA's use of the flag. ~ link

> EVEN THOUGH he is dead, bloggers continue to crucify Osama bin Laden. He's a pretty easy target at this point. ~ link
Posted by Brad Boydston at 5/14/2011

We got boots and belt buckles in the Central Valley, too!

Yep. We lived in the Valley for 11 years before Guam. There are some boots & buckles there. But there are also some palm trees -- and people that hit the coast for the weekend.