CONTRARY TO commonly accepted myth, and the high profile lives of the Hollywood crowd, the number of long-lasting marriages in the US has actually risen, according to the Census Bureau. ~ Washington Post 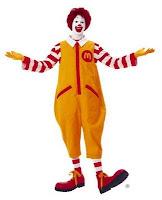 RONALD McDONALD stays! No retirement in sight. I'm sure that the food vigilantes aren't too happy. ~ WSJ


When it comes to the threat of terrorism, the Canadian border is a bigger problem than the Mexican one, a US security official says.

Customs and Border Protection Commissioner Alan Bersin said he is concerned that potential terrorists are exploiting Canadian loopholes to gain entry to the United States.

“We have had more cases where people who are suspected of alliances with terrorist organizations, or have had a terrorist suspicion in their background – we see more people crossing over from Canada than we have from Mexico,” he said during in his testimony to the US Senate this week. ~ Globe & Mail

Given the sheer number of people crossing in the from south I don't understand how the northern border is the greater concern. Interesting.

KYLE SMALL has a good piece on the church and ministry in Thailand. ~ link

THE WHOLE church membership thing has become even more confusing than before! ~ Christian Century

SINCE PEOPLE seem to have rapture fever this week, I'll point to N.T. Wright's "Farewell to the Rapture." Even if you don't buy 100% of his exegesis he does nudge the discussion in a direction that is more biblically sound.

My buddy Sean Meade asked, "Is there any point on which you disagree with Wright?"

The answer is, I think I am in agreement with him, but I'm open to other opinions. In his book Surprised by Hope he talks about the fact that the word parousia, which is often translated as "coming," more precisely means "presence" -- "as opposed to absence."

Here he is at Wheaton College elaborating on it all.