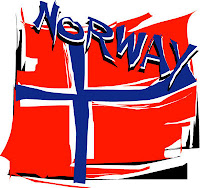 MIKE ELGAN has generated a lot of discussion through his post on the cushiness of the Norwegian penal system. I suppose we, the American experts, need to chime in to tell the Norwegians how prisons should work and how they should re-write their laws. ~ link

ALL THE SCANDINAVIANS that I've heard during interviews on television and radio are more articulate in English than most Americans -- more vocabulary, better word choices, more interesting sentence structure...

THE TEA PARTIERS ARE RATTLING their sabers -- still believing that they have some kind of massive mandate from the people to throttle the government. But I wonder if voters will simply cast them onto the political trash heap in the next election after perceiving that their approach compounds the economic problems we face. The latest polls seem to indicate that the Partiers are out of touch with the wishes of the people on the debit ceiling issue. We need leaders who can pull people together. Our problems are more psychological than financial. ~ CSM | WP

I'M AUDITING A CLASS in cross-cultural relationships at the Fuller Seminary Southwest campus. It's fun watching Judy Lingenfelter, a master teacher, lead the class. It's energizing to see the creativity of the students as they do their presentations. It re-ignite the optimism in me.
Posted by Brad Boydston at 7/27/2011