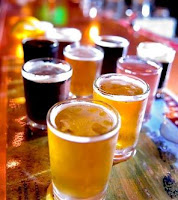 I'm not much of a drinker. If I go to a party and they hand me a beer I'll carry it around for awhile so that I don't offended anyone. (I remember carrying the same bottle of beer for over two hours at a birthday party that my Laotian refugee neighbors were throwing. All I could handle was a small sip. Sometimes even the smell of alcohol turns my stomach.)

And it's never really bothered me to see Christians drinking beer or wine. It's just not a biggie. I'm glad that they can enjoy themselves. And I wouldn't even give it a second thought except that some people have become vocal and defensive about their right to brew.

I do find three aspects of the evangelical brew movement somewhat troubling (see Scot McKnight's post, quoting Doctor of Hyperbole John MacArthur -- especially the comments -- for context and impetus for my own reflections):

1. A reverse legalism which seems to make beer consumption a mark of Christian authenticity. If you don't drink you are somehow spiritually deficient -- lacking in earthy genuineness.

This, of course, is silly -- especially considering that there are plenty of biblical teetotalers. In the Old Testament Nazarites practiced abstinence (Numbers 6:2-4). In the New Testament John the Baptist avoided alcohol (Luke 7:33). And evidently Timothy wasn't much of a drinker either; because the apostle Paul encouraged him to drink a little for his health (1 Timothy 5:23).

2. The related notion that the mission and ministry of the church is primarily about having a grand conversation. In that context beer is seen as the conversational lubricant. Now, don't get me wrong. I'm all for dialog and conversation. But frankly, there is a whole lot more talk than action taking place. Talk is good but there are a lot of people stuck at that stage. If we need a lubricant, it is a lubricant that will move people out of the pubs where they sit and talk with kindred spirits, and into the streets with the homeless and across the ocean with the unreached.

3. A kind of naivete about the effects of alcohol. Yes, you are free to drink -- but at least some of you shouldn't. There is no shame in saying that you and beer don't mix well or that there is a genetic disposition toward alcoholism in your family, so you avoid it. 10% of the Americans who drink become alcoholics. I've heard other statistics that I can't back-up but which sound reasonable -- about 20% of all drinkers have some kind of alcohol related problem at some point in their lives.

If you drink you should be self-aware and constantly monitoring your habits. If you don't drink you can relax -- and you'll have one less thing to worry over.
Posted by Brad Boydston at 8/22/2011

referencing 2. hmmmmm... I was under the impression that the whole idea of going to the pub was to get beyond the walls of the church's buildings and it seems we've simply replaced them with the walls of the pub (or Starbucks, or Peet's,or Coffee Cat for the teetotalers)?!

I've noticed the emerging church has a similar approach to alcohol as the neo-calvinist movement....and it does turn me off in that I have no desire to drink!