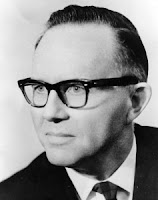 Eugene Nida, perhaps the most influential Bible translator of the 20th century, died this morning in Belgium. He was 96.

Dr Nida combined concepts from linguistics, cultural studies, communication sciences, and psychology, to develop "a practical approach to translation he called dynamic equivalence or functional equivalence, the goal of which was to make the translation clear and understandable as well as accurate."

His thinking still significantly influences the way that Bible translation is done throughout the world.

In the English, the first major "dynamic equivalent" translation based on his approach was Good News for Modern Man (aka Today's English Version or Good News Bible). Subsequently other translators have adopted or moddyfied his approach of rendering idea for idea rather than just word for word. I would guess that the New Living Translation is one of the most popular versions rendered in the Nida tradition. Other versions such as the NIV, NRSV, and the CEB have to one degree or another come under his spell, too.

Email ThisBlogThis!Share to TwitterShare to FacebookShare to Pinterest
Labels: Bibles