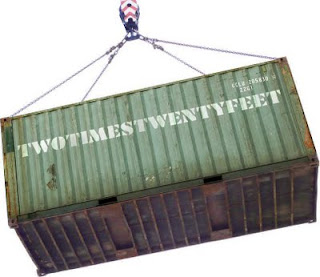 SEAN MEADE sent me a link to this site which features repurposed shipping containers. Why is it that we find these containers so intriguing? I think it's because they're simple, ubiquitous, not so sightly in the raw, we like the idea of recycling so that the new is better than the old -- and they remind us of the building blocks we had as children.

"RESEARCH, to be published in the journal Psychological Science, finds that Chinese people who are fluent in English translate English words into Chinese automatically and quickly, without thinking about it." ~ link

NO KIDDING -- "Auspicious new science suggests that chocolate can have a surprisingly large effect on the body’s response to exercise, although not in the ways that many of us might expect, and certainly not at the dosages most might hope for." ~ NY Times

MANY MAJOR media outlets fell for a hoax which reported a study showing that Internet Explorer users have lower IQs than users of other browsers. ~ BBC

FOR REAL? Robert Lee Tran Truong (aka King Cuu Long) a self-proclaimed pastor, billionaire and "King of Vietnam" is apparently going to make a $99 million offer for the Crystal Cathedral. Too much weird stuff in the story to take it at face value. ~ link
Posted by Brad Boydston at 8/03/2011