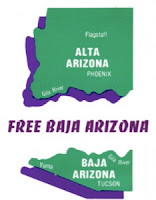 > NOT EVERYONE IS HAPPY about the way things are going in Arizona. Some in the south want to secede to form a new state -- Baja Arizona. I suspect that most southerners just want to make it clear that they think and see the world differently than those in Alta Arizona. ~ KTAR

> I'VE NEVER BEEN much of a gum chewer. But the new "Extra Dessert Delights Sugarfree Key Lime Pie Flavored Gum"

from Wrigley's may change that. You know that I have this weakness for key lime pie.

> SOME VOTERS really do think for themselves. ~ Chicago Sun-Times

> ANYONE WITH a 5th grade education in American civics would rule this unconstitutional -- "Tennessee bill would jail Shariah followers." Don't expect it to pass -- just a bunch of good ole' boys blowing off steam -- unhappy with their inability to control their world. ~ USA Today

> THE US government is paying an Army veteran $400,000 for wrongfully detaining him for seven months as an illegal alien. Paperwork mix-up -- the consequence of poor spelling skills and inattention to detail. ~ LA Times

> SAID MUSA has been freed from prison and Afghanistan. ~ CT

> I'M HIGHLIGHTING more of Eugene Peterson's new book The Pastor: A Memoir than I'm leaving unmarked -- at least in the non-narrative sections. He's so good at telling the pastoral story.

> DAVID FITCH says that he has been converted by Launching Missional Communities: A Field Guide. ~ link

Thanks for the link, Brad. Someday we will meet in the flesh!

Had a great conversation with our mutual friend, the other ECC Brad, on Wed. He's doing well.

...and it was Darryl Dash who called me a Gadfly when we were at lunch a couple of weeks ago. I had to go and look it up. Wasn't sure if I should have been insulted (but since Darryl is a irenic as he is, I figured it didn't mean what I thought it meant.)