Why don't they learn English? 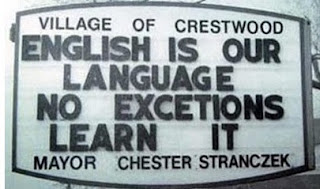 Scot McKnight had this sign as a fun item on his blog yesterday. And it is a bit humorous -- that someone so obnoxiously passionate about English can't spell in English. Also the sign is pointless since you can't expect people who don't know English to understand that this sign in English is telling them to learn English. It's a silly circle.

In a sense though, this sign goes beyond silly. It is an indicator of something quite troubling. The problem is in the tone -- the tone which has become all too common -- and not just in Crestwood, Illinois.

Yes, of course, people should work on learning the language of the place and the people with whom they live. And since English is the "lingua franca" of the 21st century (at least the first part of it) there is added incentive to learn it.

Of all the immigrants and international students with whom we've worked in the US over the years -- almost all of them have really really wanted to improve their English. A few older people have given up, figuring that they're past the age of learning. So, why try? But on a whole, people do want to learn the language. However, they struggle to squeeze language learning into their already overloaded survival schedules. Some of them don't know how to go about learning. Many come out of situations with sub-par education -- where they didn't really learn how to learn. And some of them just keep putting it off in the same way that most Americans put off mastering an additional language.

The point being -- it is ineffective to harangue immigrants over their language skills. It's certainly not motivating. Perhaps the village might better use its sign to advertise language classes or to welcome immigrants. People who feel welcome are much more likely to learn the language because they WANT to fit in. They want to be a part of a society that is positive, welcoming, and engaging. The more we harass people for their weak English skills the less likely it is that they'll want to learn the language.

In other words, the sign, even if it were written by someone with a command of the English language, is self-defeating and counter-productive. If we want people to learn the language we have to treat them like we care.

Amen. Or as they might say in Thailand, ขอให้เป็นเช่นนั้น.

LOL.. I had to google "define excetion".
Very true, as a bilingual speaker, I understand how we really want and need to learn the universal language. I see family and friends who would rather ignore that because of negative response.

Perfect. Thanks for writing.

Funny thing is you could go a couple ways. The obvious is "no exceptions," but it could just as easily be "no excretions." And an excretion is what I think of when I see signs like this.

Having been the immigrant needing to learn the language of another country, it's not as nearly as easy as people think it is. People get impatient with my attempts to communicate when I don't do it perfectly; they assume I don't know the language just because I am a "gringa," (even if I haven't spoken a word); and sometimes people assume I am not as educated as I really am because my vocabulary in my second language is not at the university level (so I am not always taken seriously professionally).

I appreciate all the people who have helped me learn my second language - Spanish. And, in fact,they are still teaching me. I'm glad they didn't wave a sign in my face telling me to hurry up and speak Spanish already or go home. I probably would have given up.

I learn 50 words per day with Vocabulary Builder