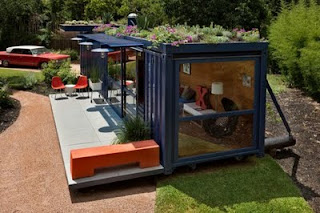 > SEAN MEADE, who knows that I am fascinated by re-purposed container construction, sent me a link to this guest house. Funky but incredibly creative architecture.

> IF THE GOVERNOR signs the bill (and I predict that she will), Arizona will have an official state gun -- the Colt revolver. And as I jestingly told Gil Ridal, who is originally from Arizona, when he pointed the article out to me, this whole official gun thing has disappointed a lot of people. Most were hoping for something more powerful. Obviously Glocks were the first choice but when it was pointed out that they were foreign-made that caused a rift within the pro-gun rank-in-file because some of them are also staunchly pro-made-in-America. I don't know why, then, that most of the guns I see on the street (and in the grocery store and in the restaurant...) look like Glocks to me (I'm not an expert but I'm not gun naive either). Of course, the hardcore -- the true patriots -- might just be carrying their colts concealed -- which is perfectly legal in Arizona.

> I PICKED UP a pack of Pepsi's new Diet Citrus Blast -- and I'm liking it -- a lot. I am a sucker for most things citrus. Citrus Blast is a grapefruit soda and grapefruit juice is actually the third ingredient. The label says that it has "100% Natural Flavors." And that may indeed be true. But that is not the same as 100% natural ingredients. It is sweeter and smoother than Coke's Fresca. And it does not seem to have any "diety" taste -- although I admit that my taste buds are pretty used to aspartame (the fourth ingredient). I'm sure that the artificial sweetener cops will be unhappy about this one. But I'm enjoying it.

> ROY GOBLE has a good piece on Jesus and pigeons. (Yes, pigeons) ~ link

> I'M ALWAYS encouraged and challenged when I read the latest from PathLight International, the organization Roy started to work with marginalized children in Belize.


As people in the Pacific gain access to more information, they are becoming less satisfied with the levels of leadership and services in their communities. The ultimate options are unclear, but it is important to note that a debate is under way.

> YOU'LL SOON BE ABLE TO "check out a Kindle book from a local library and start reading on any Kindle device or Kindle app." ~ link