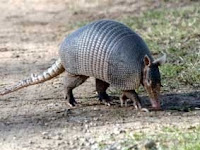 > LEPROSY-INFECTED armadillos can pass the condition on to humans -- another reason to avoid eating Texas roadkill. ~ AZ Central

> AND THEN Donald was on TV -- not apologizing to the president. But he was taking credit for solving this great mystery that has dogged the poor American people -- victimized by the unresponsive president. He is such a manipulative showman -- how can anyone take Donald Trump seriously -- about anything?

And really, I doubt this settles it, anyway. The next rumor will be that Obama used his illegitimate presidential powers to counterfeit a long-form birth certificate. (When you're the son of the devil you can do most anything you want.)

I'm not saying I'd vote to re-elect him but let's be fair to the president.

> SPEAKING OF ACTORS -- Arnold says that he will play The Terminator again. Now things in California can finally get back to normal.

> SAD -- He wasn't wearing a seat belt. "Rev David Wilkerson, founding pastor of Times Square Church in New York City and author of the best-selling book, 'The Cross and the Switchblade,' has died. He was 79." ~ AP
Posted by Brad Boydston at 4/28/2011

9 banded armadillos have been used in leprosy research for many years. I think it is because they can be infected but also because all their offspring are genetically identical.