John Stott, the most influential evangelical of the 20th century, has died. 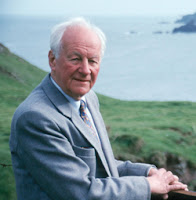 I do wish he was more influential. I heard him speak several times, read his books, and used his book on preaching to teach. He was not flashy, domineering, nor a "celebrity," but was clearly a statesman style leader and scholar. Perhaps his death will spark a renewed interest in his writing.

John Stott died today at 3:15 London time (about 9:15 a.m. CST), according to John Stott Ministries President Benjamin Homan. Homan said that Stott's death came after complications related to old age and that he has been in discomfort for the last several weeks. Family and close friends gathered with Stott today as they listened to Handel's Messiah. Homan said that John Stott Ministries has been preparing for his death for the past 15 years. "I think he set an impeccable example for leaders of ministries of handing things over to other leaders," Homan said. "He imparted to many a love for the global church and imparted a passion for biblical fidelity and a love for the Savior." ~ link
Posted by Brad Boydston at 7/27/2011