I've been trying to wrap my mind around some of the thinking that characterizes Arizonians in 2014. Specifically I've been trying to figure out why we're working so hard to remove incentives for people to adopt alternative energy. The rest of the world is scrambling to find ways to become independent of fossil fuels. We're seemingly trying to discourage alternatives. Specifically we're removing incentives for residents to adopt solar power systems.

In my mind, we should be creating more incentives to give this kind of thing the edge it needs to gather momentum. We need to continue to incentivize behaviors which make a long-term contribution to the common good. The issue is long-term vs short-term thinking.

However, many Arizonians do not believe there to be long-term benefit in alternative energy sources. In their minds environmental issues of any sort are artificially contrived problems designed to empower left leaning political ideologies. That is the source of the push back and they will not be convinced by facts or studies or scientific consensus. They can't even see the economic benefits because in their minds this is all a passing fad. Once their political power grows to the point of total control the true nature of this environmental kookiness will be self-evident. Or so they assume.

This is why they do not want to have alternative power incentives. But in our state they take things even further and to vent thier political frustration -- and fight the environmental kooks who are trying to dismantle society as they know and like it -- they are actively trying to create disincentives for solar. 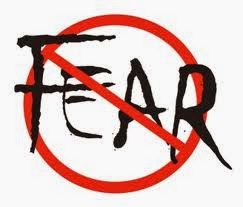 The real crux of the matter is that we're driven by fear.﻿ Fear drives much of what happens in our state. We're afraid of being overrun by immigrants, Spanish words, drug cartels, the media, Californians, the federal government, environmentalists, the economy, Obamacare, gun restrictions, taxes, and regulation.

We have to ask, then, why fear plays such a prominent role in Arizona thinking? Have we been baking out in the desert sun too long?

People tend to gravitate toward fear when they're looking for a lift. We enjoy scary roller coaster rides and horror movies. The fear makes us feel significant -- even alive. We feel like we're important players when we enter into the drama of fear. We enjoy getting worked up.

Somehow, we've become a magnet for fearful people. It certainly wasn't like this when I moved to Arizona the first time in 1975 and a Mexican immigrant named Raúl Castro was the governor.

I want to suggest that perhaps we can turn that magnet off and look to our risk-taking adventuresome, multi-cultural, pioneering roots to rise up out of the ashes of fear.

As FDR said in his first inaugural address (1933):


So, first of all, let me assert my firm belief that the only thing we have to fear is... fear itself — nameless, unreasoning, unjustified terror which paralyzes needed efforts to convert retreat into advance...

We need to spend less time and energy looking for things to be afraid of and direct more of our focus onto that which alleviates fear -- which builds a future. As St Paul says:


Be glad in the Lord always! Again I say, be glad! Let your gentleness show in your treatment of all people. The Lord is near. Don’t be anxious about anything; rather, bring up all of your requests to God in your prayers and petitions, along with giving thanks. Then the peace of God that exceeds all understanding will keep your hearts and minds safe in Christ Jesus. (Philippians 4:4-7, CEB)

Fear is a spiritual problem that is short-circuiting our social well-being. And there is a spiritual solution that starts with the sense of safety that we experience when we are living in Christ Jesus.
Posted by Brad Boydston at 7/03/2014