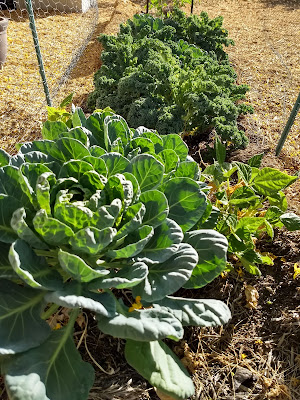 Broccoli, beans, and kale growing
in a straw bale in our garden.


Three years ago this month, after I noticed a correlation between meat consumption and an increase in joint pain, I became a vegetarian. The extreme pain disappeared pretty quickly. And I have not been prevented from getting out of bed in the morning by major stiffness in my legs. I'm not saying that all my arthritis-related pain is gone but eliminating meat has made a world of difference.

It has, however, been a bit of a journey learning how to live without meat and fish. A few observations:
Eliminating meat three years ago was a good decision for me -- certainly no regrets.
Posted by Brad Boydston at 4/04/2018

Email ThisBlogThis!Share to TwitterShare to FacebookShare to Pinterest
Labels: vegetarian