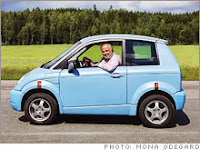 ~ Not just electric! Wi-Fi included. I hear that it doubles as a PDA. Will only be available online (on Amazon?). Check to see if the Post Office can ship it in one of those flat rate priority mailers. New business model for the personal transportation business. Perfect for Guam -- if it has A/C. I want a green one.

~ Another Korean missionary hostage has been murdered.

~ The popularity of online university study continues to rise.

~ The future of "missions." More outside the box thinking from Bob Roberts.

~ The August edition of Christianity Today arrived today -- before August. Usually CT goes on the slow boat through China to get here, with an ETA of about 1-2 months after the cover date. Not all magazines move through the system so slowly -- and CT somehow managed to get this issue here on time. I think it was because they put a "This is your last issue" cover on it and shipped it separately. Yes, I renewed. I paid for the 2 year renewal because it was cheaper per issue than either the 1 year or 3 year renewals (go figure!).

~ There is a tropical storm in the Atlantic -- no threat to the US. Meanwhile in the Western Pacific, it looks to me like there is some kind of tropical depression, perhaps two, forming in the wake of Typhoon Usagi (which is now bearing down on Japan). We'll see if they amount to anything.
Posted by Brad Boydston at 7/31/2007

Email ThisBlogThis!Share to TwitterShare to FacebookShare to Pinterest
Labels: storms