~ Leading economic indicator: the demand for expensive booze is up -- especially in Latin America and Asia.

~ A bomb squad in Virgina blew up a weather station because they thought it looked suspiciously like a bomb (The Weathermen are back!). There was no indication as to whether the tree to which the "bomb" was attached was harmed in the blast. No charges will be filed against the officers. 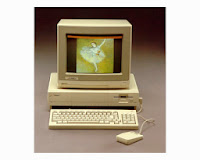 ~ In the mid-80's I really really wanted an Amiga. Every other week I used to wander into the one computer store in Yakima, Washington which carried them so that I could drool over the keyboard. But we were not people of even average means at that point. So, it never happened. Still, it was and in someways remains my dream machine.

Ars Technica is running a History of the Amiga -- it's rise and decline -- the reason it was no longer an option once I could afford one.

~ Missions Fodder: The Pyramid Model and Missions -- MLM for Jesus! Nah -- not really.

~ Religion in the Simpsons Movie. My take on it is that Flanders was the only real person in the story. Sure he's a little bit of a tight collar dufus. But he's the one actively extending compassion to Homer and his family when the lynch mob approaches. He's the one who takes the troubled Bart under his wings. He returns kindness when certain people are unkind to him. He carried the day.
Posted by Brad Boydston at 8/01/2007