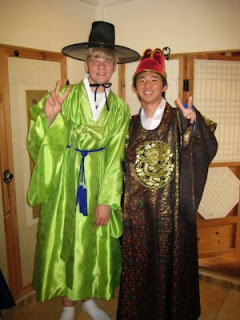 ~ Kent has some fun and impressive pictures of his Korean adventure. In this portrait he is the -- ahhh -- one on the left. (Shrek green must be a family trait.)

~ They're being extra noisy overhead today -- helicopters and fighter jets. The Valiant Shield war games which are happening around Guam must have started. There are three carrier convoys sitting out there somewhere in our Pacific. The local businesses are drooling -- hoping that the extra 20,000 sailors and Marines in the neighborhood will get some shore time.

~ Scot McKnight has started a new series of posts on the "New Perspective of Paul." Anything to bring clarity to the topic! Most people don't understand the nuances of the conversation. And I include myself in that category. I hear people bashing N.T. Wright for saying things that I don't hear him saying. But I suppose that if you're tied into a system that depends on a really tight weave any redefinition -- slight or substantial -- is seen as an attempt to unravel the whole thing.

~ These freebie Bibles are too disposable, complain some Christians. Maybe they have a point. In our eagerness to make the Bible available are we undermining its perceived authority by mass producing it in a disposable format? Don't too quickly blow off the critics of the IBS Send the Light New Testament newspaper distribution. Even if they're curmudgeons (I don't know that they are) they are raising important issues.

~ The ELCA is meeting in Chicago this week. I doubt that they'll do anything radical -- although there are a few radicals who would like to stir things up. Generally speaking, though, Lutherans don't like to get too stirred up -- at least not all at once -- the Northern European gene pool is still active.

~ The WHO (not the 60's rock band) is warning that a Western Pacific outbreak of dengue fever is likely. Palau is already under attack. I want to go on record stating my contempt and disdain of blood-sucking disease-spreading buzzing bugs.

~ Barna's latest: "Americans are unconcerned about their spiritual condition." This is news? However, the issue is deeper and more nuanced than the superficial questions asked in the survey.
Posted by Brad Boydston at 8/05/2007