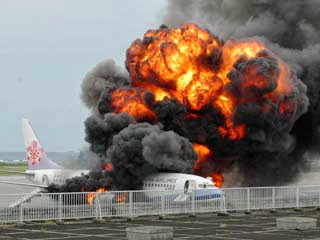 ~ God, we're grateful that everyone got out and that no one was injured.

~ South African Theological Seminary has been given a green light by the Council on Higher Education to begin offering the Doctor of Theology (DTh) degree. SATS is one of the best distance education schools in the world. For Americans it's inexpensive, too, because the dollar buys a lot of Rands these days. Hopefully, though, SATS will have to limit the number of American students because they're swamped by applicants from Africa and the developing world. Hopefully. Hey, SATS, we're proud of you and your perseverance to get to this point. 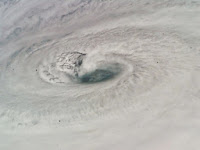 ~ The Dead Sea is dying

~ It looks to me like the storm front that just passed over Guam, dumping rain tonight, is wound up tight enough that it could form a tropical depression to the west of us. Meanwhile on the other side of the world Hurricane Dean is beating the snot out of Jamaica right now and is headed for Cancun. The picture is of Dean, as seen from the International Space Station.
Posted by Brad Boydston at 8/20/2007