First snake of the year 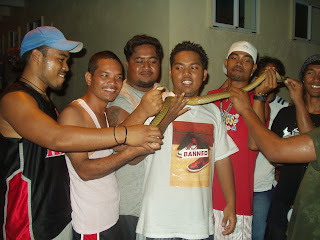 Some of the PIBC guys are posing with the brown tree snake that Happiness Lodge caught this evening. The snake which is nearly six feet long was traveling along one of the chain-link fences on campus when Happiness grabbed it.

It was the first capture of the new school year and it put him ahead of Joyce Owen who has been competing with him for the past several years to see who can kill the most snakes.

Brown tree snakes are an invasive species on Guam. They've been responsible for the almost total decimation of the bird population on the island. Apparently they arrived as cargo stowaways from the South Pacific just after WWII.

There have been a lot of creative efforts to rid the island of the snakes. The most recent involves baiting them with acetaminophen laced rats. Apparently Tylenol is toxic to the snakes.

I got my first snake on August 20th of last year. But I've only encountered one other since then. It was dining in the dumpster at our condo complex. I whacked him with my machete but he managed to slither back into the jungle before I could finish him off. In other words, I'm not even in the same league as Happiness or Joyce.
Posted by Brad Boydston at 9/23/2007