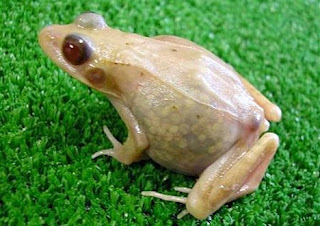 ~ Tomorrow is the first day of fall -- or is it spring? When you're at 13° North it doesn't make much difference.

~ Japanese scientists have reportedly developed a new breed of frog, which happens to be translucent. Why does the frog in the picture look like he's just eaten a bag of gravel?

~ Tens of thousands of Japanese are coming to Christ via Bach. Who would have ever thought of using Bach as an evangelistic strategy in Asia? It makes no missiological sense. But the wind blows where it blows.

~ Our PIBC students who went to Thailand this summer have posted a 7 minute video on YouTube.

~ So the lesson is, make sure that you tuck in all your wiring if you're going to the airport.

~ Internet-ordination doesn't make one a valid minister in Pennsylvania according to a new court ruling. A way through this mess would be to have each state establish a system where anyone can become a licensed marriage officiant. If ministers want to become officiants that 's fine. If others want to do it -- that's fine, too. But officiating isn't automatically attached to ordination. Many pastors would like to get out of the wedding business -- at least the legal side of the operation. We'd be happy to let couples do a legal wedding contract at the courthouse to keep the government happy and then we could do the public wedding ceremony without having to worry about whether or not the state recognizes our ordination -- or whether the paperwork is filed right.

I'll have to tell my wife about the Japanese conversions as she has always had a special interest in Japan. As for me, I always have liked Bach. Very interesting and it does make some sense to me, looking at the article.