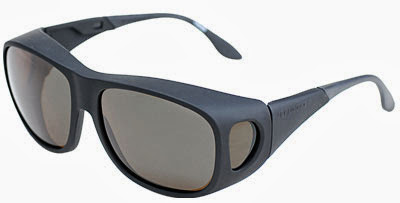 ~ My new pair of Cocoons sunglasses arrived in the mail today. My old Cocoons, which are showing their age, are brown. The new ones are black. So in the interest of style I can now match my glasses with what I'm wearing each day. (I'm half tempted to buy a camouflage pair to go with all the green I wear.)

I can't tell you how many people on Guam have stopped me and asked where I got my glasses. They love them! Of course, all those people have been over 55. The younger people all turn away and snicker.

Well, at least the glasses are comfortable and if someday I want to take up fishing I'll be able to see right through the water. More importantly, though, I haven't found anything else with this kind of UV protection -- which is important when you live with endless summer on an island 13º north of the Equator.

~ Forbes list: The 100 most powerful women in the world. Hmm? Define "powerful." Almost all on the list are politicians or CEOs. Only two have television shows. Yet it wouldn't be difficult to argue that media exposure and entertainment seems to be the driving force in shaping global culture -- more so than the US secretary of state. Even Oprah isn't listed as an entertainer but as the chair of Harpo. These top 100 women are by no means unimportant but the list reveals Forbes' prejudice that everything revolves around corporate identity and political office. That's not the whole story.

~ "'Enough is enough,' shouted the Hebrews when they heard some American Protestant preachers were predicting that Russia and Iran would invade the Holy Land soon, 'We want out of this Chosen People contract.'" Link

~ We created this mess by further destabilizing what was an already unstable situation. In our cockiness we were so hell-bent on a John Wayne style shoot-from-the-hips ignore-everything-we-know-about-history-and-culture path that we actually re-elected the president who led us into the quagmire -- even after it was obvious that his approach wasn't working. WE CHOSE THIS. But now we want out -- and fast!

Yes, our approach to the Iraq situation has been a failure. But the unfortunate fact is that if we pull out now thousands and thousands of innocent people will die in the vacuum that we've created. The honorable and right thing to do for the people of Iraq and the surrounding region is to ride this one out while we aggressively shift to a more diplomatic strategy.

~ Bookmarks: (1) NoteSake.com -- note-taking software (2) Use Google to determine the time around the world -- "What time is it (name of place)?"

~ California Graduate School of Theology now has a statement on their website announcing their merger with Hawai'i Theological Seminary. Once they're done with the process I suspect they'll end up with a new name and new respect. This looks like a win-win-win-win deal -- students, Cal Grad, HTS, and the Church.
Posted by Brad Boydston at 9/12/2007