~ Trinity Theological Seminary (Newburgh, Indiana), which is a major player in the unaccredited distance education world, has announced that the University of Wales will be validating their BA and MA degrees. TTS, which has been thwarted in their attempt to get American accreditation, has had validators from the UK before -- twice. This time, however, it appears that Trinity is going to become a teaching site for the Wales degree and the degree will actually be granted by the well-recognized university. This is all subject to final approval by someone. And it doesn't do anything for the TTS doctoral students.

I don't know. I've rolled my eyes at Trinity more than once. Maybe 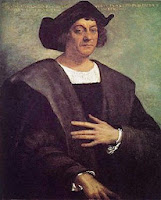 this time they'll be successful in their quest for legitimate recognition.

~ The public schools on Guam were closed today for Columbus Day. I went to public schools on the mainland that Columbus somehow got credit for discovering, and we never got Columbus Day off from school. How is it that Guam feels so connected to Christoffer Columbus that they'd shut down the educational system in his honor? We don't even have that many Italian-Americans here to keep happy.

~ It appears that the Wendy's in Barrigada is also closed -- at least the dining area -- temporarily as they remodel. The PIBC staff women went out for Thai food tonight -- so I was left to fend for myself before going back to campus to teach my evening class. I was all excited about my Man Night Out at Wendy's -- just me and my book -- but it wasn't to be.
Posted by Brad Boydston at 10/08/2007