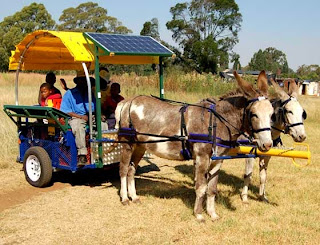 ~ The Africans are some of the most clever and inventive people. Check out the donkey cart with solar panel.

~ Joni and Friends has a new TV show.

~ Is your church fighting the Covenant? Why does Microsoft continue to pick on a small denomination like the Covenant? I mean, they could have had everyone going after the alien Baptists or Methodists.

~ Really dumb self-incriminating bad guy who thought he had mastered Photoshop. Now his picture is all over the place and there is no where to hide.

~ Cell phones have become the essential tool of democracy in developing countries. Civil rights abuses are quickly showing up on the Internet. For example, consider the Egyptian situation. There is no where to hide.

~ Our cell phone carrier HafaTel (which we called Half-a-Tel -- because it worked half the time -- if we were lucky) appears to be no more. Last year NTT DoCoMo, Japan's largest wireless company, purchased HafaTel and GuamCell for $72 million. Last month they did some kind of techno magic which made HafaTel disappear and put us onto the GuamCell system. The signal is a lot clearer. We don't have as many dropped calls. And... I can actually talk on the phone inside some buildings now. So long HafaTel. I can't say that you'll be missed.

~ Franky Frank Schaeffer, has written his memoirs -- Crazy for God.

~ Electrical storm getting closer -- time to disconnect.
Posted by Brad Boydston at 10/09/2007

I'm a first time commenter, and I don't know if there's any truth to this but my cousin said the guys who developed the idea for Halo went to North Park. Hence, the Covenant being the enemy.