~ I have a short update about the weekend events and the current crisis on our Guam ministry blog.

~ Who is Robert? And why DO we follow his rules, anyway?

~ 21 major cities in the world are in danger because of rising seas -- not to mention a few thousand minor cities and islands out here in the Pacific. 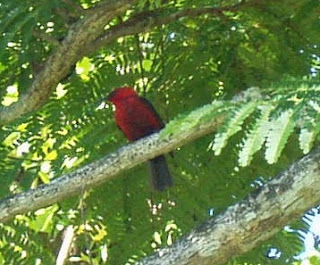 ~ One of the great things about Chuuk is that unlike Guam they have lots of birds. Here is a picture I took on Weno, Chuuk of a Cardinal Honeyeater -- or as they say in Chuukese a "Likeitepar." It wasn't easy getting him to pause long enough for the picture.

There were Cardinal Honeyeaters on Guam prior to the accidental introduction of the Brown Tree Snake.

~ Watching TV on the laptop for cheap

~ Did I mention that there are no television stations on Weno, Chuuk (the largest city in the Federated States of Micronesia with a population of about 15,000)? There was a station at one time but the owner apparently died and no one took over the operation. There is one government run radio station -- sort'a. No consumer satellite options. No fiber optic cable to the island either. There are lots of little DVD rental places.

I agree with your points about the cable, but it had nothing to do with the owner dying, it is just the fact that no one has the money to operate and get the necessary licensing to continue its operation, FSM Telecom is talking about providing cable service, as it does in Pohnpei