~ Co-Founder of Greenpeace, Patrick Moore is speaking out in favor of a nuclear future -- Link 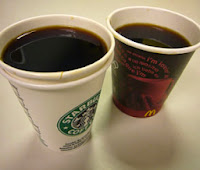 ~ McDonald's is attempting to expand its line of coffees to more directly compete with Starbucks. Franchisees are a bit resistant.

I'm not much of a coffee drinker but I understand that McDonald's coffee is already pretty good. I remember seeing an independent survey which showed that most people in a blind test prefer McDonald's rich brew over Starbucks. Mickey D's challenge has to do with ambiance and image -- that's mostly what Starbucks (and Caribou, Timmy Horton's, etc) is selling. And coffee connoisseurs tend to be very image conscious people -- probably not wanting to be seen drinking from a Ronald McDonald cup. -- Link

~ Jerry Mosby, a well known and respected pastor in Covenant Church circles, has died after a long struggle with diabetes. He was only 59 years old. -- Link

This is the second major pastoral loss for the East Coast Conference. Earlier this year John Marks, who was serving in Livingston, New Jersey, died of heart failure at the age of 62. -- Link

~ The Golden Compass has suddenly come up on everyone's radar. e.g. Terry Mattingly has written about this blatantly anti-Christian movie -- so has Martin Marty.

~ Most people only THINK they're going to die in the airport line. "QANTAS staff have been booed by frustrated passengers at Brisbane Airport after leaving their check-in counters to assist an elderly woman who collapsed and died in the long queue." -- Link

As Jeff Berg points out, traveling brings out the worst in people.

~ Southwest Airlines customers are pretty unhappy about the new fare structure that gives preferential seating to customers who pay more for their tickets. Is this the end of their icon status? It appears that they're on the verge of becoming just another airline. -- Link

~ Will video kill the Internet? At the current pace of development there are two years left before everything becomes unbearably slow, according to a USA Today article. "To avoid a slowdown, these companies, and increasingly, wireless services providers in North America, must invest up to $55 billion, Nemertes says. That's almost 70% more than planned." -- Link