Happiness Lodge, who is from Chuuk State in the Federated States of Micronesia, and who is one of our extraordinarily perceptive students (and is humble enough that I'm probably embarrassing him and his entire family by speaking publicly of him in this way) has a wonderful post on his blog highlighting the being vs. doing differences between Micronesian and Western cultures. 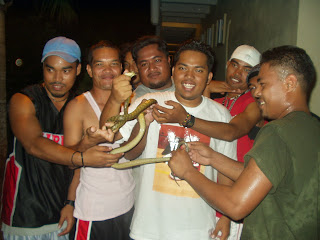 This is Micronesian Culture 101 for Westerners.

(In the picture, Happiness, with white short sleeve shirt, is sharing the snake he captured with some of the other PIBC students. As far as I know they don't have snakes in Chuuk, from where most of these students hail. The Brown Tree Snake, an invasive species on Guam, is only mildly venomous and really poses very little risk to humans.)

Read his post before you read my comments below.

MY RESPONSE TO HAPPINESS

You've listed what many of us, even Westerners, see as the strengths of Micronesian cultures. And I'm sure that you better than we could identify the weaknesses of your own culture.

However, as I see it, the challenges facing Micronesians don't necessarily have to do with individual cultural characteristics but in how to maintain the best of being Micronesian while you relate to other cultures. And it's not just a matter of relating to Western culture anymore (or should I say Western cultures -- for not all Western cultures and sub-cultures share the same time, work, and family orientation). The lines between East and West are blurring in the globalized context.

In the ancient world Greek was the trade language of the Roman Empire. People still maintained their own languages but they figured out how to switch between their native language and the koine Greek according to context.

In the 21st century we have a situation where it's not just a common trade language but a common global trade culture which is emerging. And it is not 100% native to any of us -- but it is a fluid fusion. Any group which does not learn how to relate to that constantly changing koine cultural wave will eventually be swallowed by it. This will be equally true of Americans, Chinese, Dutch, Mexicans, and Chuukese.

We're all trying to figure out how to surf the wave without letting it swamp us.
Posted by Brad Boydston at 11/19/2007

Thanks for the link to story about adjuncts, Brad. As one myself, I am grateful for the opportunity to do what I love, but it does have its challenges.

One of the most difficult parts for me has been not being able to teach a class twice, so as to improve it the second time around. Tenured faculty have that privilege; but adjuncts are the temps of the academic world.

We are the disposables, and our courses are, too. The trick is to make our relationships with our students something that will have lasting impact.