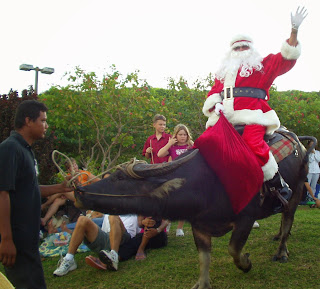 I thought I heard Santa at 4:50 this morning -- but it was just the rain on the banana leaves.

I fell back asleep and sometime in the predawn morning he arrived -- bringing new snorkel gear, a Shrek the Third DVD, a Jake Shimabukuro CD, and a tangerine in my stocking.

Then later in the morning, on our way to Ypao Beach to go snorkeling, Santa (without his carabao, which was obviously home resting after an exhausting night) was out on the street in front of the Mangilao mayor's office waving at the passing cars.

He must be into energy drinks.

A popular song on Guam -- at least among mainlanders on the island:

Jungle Bells
Here we are on Guam
without a hope of snow.
But through the spreading palms
a typhoon sure can blow.
Santa Claus will know,
what the tropics will allow.
Instead of riding eight reindeer,
he'll ride a carabao.
Chorus:
Ohh, jungle bells, coconut shells,
sticker burrs all the way.
Oh, what fun it is to ride
in a two wheeled carabao sleigh.
(repeat until you're sick of it)
Posted by Brad Boydston at 12/25/2007