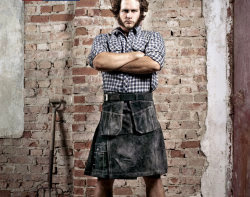 ~ A "kilt" for males in the trades has been introduced in Sweden -- complete with "roomy pockets needed to carry necessary tools." It's also touted as a "striking fashion statement."

I think it looks looks strikingly like a skirt -- the kind of thing that smart women in cold climates have abandoned for the warmth of pants. -- Link

~ The US federal government, facing a "retirement tsunami," is about to go on a hiring frenzy. -- Link

~ The end of an era -- the beginning of something new? CCM Magazine is shutting down the print version of their publication and refocusing their online coverage. BTW, CCM no longer stands for "Contemporary Christian Music" -- but for "Christ • Community • Music" -- Link

~ While the birth rate in the US is booming the abortion rate has fallen to its lowest level since 1974. -- Link

~ "An official Canadian government document has put both the United States and Israel on a watch list of countries where prisoners run the risk of being tortured, CTV television reported on Thursday." -- Link

Ahhh... is "forced nudity, isolation, and sleep deprivation" torture? Not to justify such degrading and inhumane behavior from a country which sees itself as taking the moral high ground, but that's probably not torture. I seriously doubt that the US is directly involved in traditional torture. If anything we're into outsourcing.
Posted by Brad Boydston at 1/17/2008