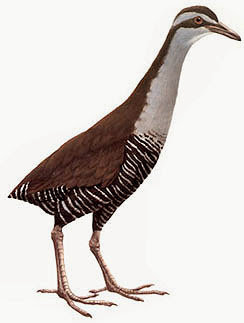 • The ko'ko (or Guam rail) is the territorial bird of Guam. However, there are not currently any of the virtually flightless birds living in the wild here -- probably victims of the snake infestation which began after WWII.

The good news is that the Guam Department of Agriculture is raising about 100 birds and plans on releasing 16 of them on Cocos Island (a small island that sets about 1 mile off the southern tip of Guam -- still within the reef) next fall. -- Link

• The new South African Theological Seminary website is up and running. -- Link

• I am told that the new Orthodox Study Bible is now available -- even though Amazon says that it's not coming out until June -- which means you can still get the pre-release discount on Amazon.

The OSB is a valuable tool even for us non-Orthodox Christians. The articles help us better understand our Eastern Orthodox brothers and sisters AND the OSB contains a new translation of the Septuagint (LXX). Of course, there is always the possibility that we might even learn something from the Bible that we just weren't seeing before. -- Conciliar Press -- Amazon

• Stockholm is having its mildest winter in 250 years. -- Link

• Kosovo is expected to declare independence from Serbia sometime today. They've received a lot of encouragement to move that direction from Albania and the US. -- Link
Posted by Brad Boydston at 2/16/2008