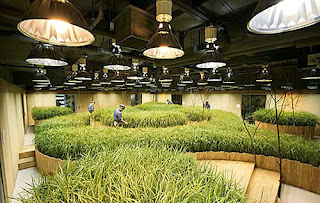 • Underground demonstration farm inside a former bank vault beneath a high rise building in Tokyo, Japan -- Link (via)

• From the new Pew Forum on Religion report on the religious landscape in American: Roughly 10% of all Americans are former Roman Catholics... 44% of American adults have switched religious affiliation in someway... "The US is on the verge of becoming a minority Protestant country. The number of Americans who are affiliated with Protestant denominations now stands at barely over 51%..." -- Lots more interesting detail

• The Church of England is planning to sell off its palaces. -- Link

• Telford Work has a fine review of Roger Olson's book Reformed and Always Reforming: The Postconservative Approach to Evangelical Theology in CT. -- Link

I thought the book was a stimulating read, too. And like Work I don't like the "postconservative" label. It's confusing and for those of us with roots in Lutheran Pietism or Wesleyan Arminianism we were never conservative in the sense that Reformed orthodoxy has infused the word so how can we be POSTconservative?
Posted by Brad Boydston at 2/26/2008