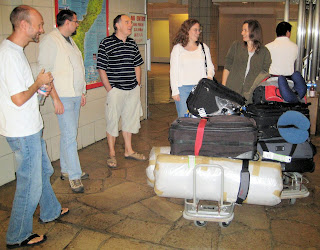 • We went to the airport at 5:30 a.m. this morning to welcome Jens and Karin Schulz back to Guam from Germany. (In the picture -- some of the staff that showed up to greet them.) They are a part of our PIBC staff but last December they had to leave because their visas had been revoked after an immigration investigator decided that their work was not religious enough for a religious workers visa. At least $5,000 and who knows how many hours of paperwork later, they are back with new and improved visas.

I'm less than impressed with the USCIS -- difficult to work with, often not very courteous to foreigners, and the right hand doesn't know what the left hand is doing -- lots of contradictory information from within the system. Sometimes its embarrassing to be an American.

• Rumor has it that Jake Shimabukuro, the world's greatest living uke player, will at the conclusion of his Australian tour be in concert at the Guam Mariott, Friday, March 28th. No time yet -- so I'm blocking out the whole day. The Hafa Adai Ukulele Club will be the opening act!

• The Super Bowl ads with the lowest consumer ratings generated the most traffic to the product websites. There is a lot more to effective advertising than entertainment and appeal. Can you think of any other areas in life where this might be true? -- Link

• "It may be that the autistic brain is not defective but simply different -- an example of the variety of human development. These researchers assert that the focus on finding a cure for autism -- the disease model -- has kept science from asking fundamental questions about how autistic brains function." -- Wired has an interesting article on the growing body of information about autism.

• Gmail maybe under attack. "Websense Security Labs has discovered that Google’s popular web mail service Gmail is being targeted in recent spammer tactics. Spammers in these attacks managed to created bots that are capable of signing up and creating random Gmail accounts for spamming purposes." -- Link
Posted by Brad Boydston at 2/26/2008