Over the past few days I've had a couple of conversations with students who were curious about the climate in Arizona and whether it was air conditioned there, too. 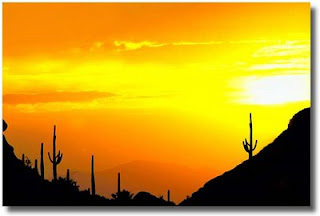 When we lived in California and Arizona we ran the air conditioner because it was hot during the summer months. On Guam we run it year-round to attack some of the humidity which isn't just uncomfortable but which creates a breeding ground for mildew and mold -- warps doors and walls and wreaks havoc on books and electronics.

Islanders think that Westerners are silly because we like rooms to be so cold, but in fact we're often putting up with the refrigeration so we can bring down the humidity. Whether the AC ("aircon" as people say here) is the most efficient way of doing such is another issue.

Having said all that I'm not sure if I should mention that in the desert areas we will often use evaporative coolers ("swam coolers" in the old days) to interject humidity into the air and cool things down during the driest months.

I find that even though the temperature is A LOT hotter in the Southwestern part of the US than it is on Guam, we spent a lot more time outside in the desert than we do here. And we had the windows open a lot more than we do here (which is never). It's just different.

Perhaps the best way to explain it is to invite islanders to visit us when we're back in the desert.