• I'm going to start a "Bring Back the New Facebook" group. **grin** Those poor FB guys just can't win. As soon as they start to bring order to the chaotic counter-intuitive FB mess the customers get upset. ~ link

• Come on you guys, it's not THAT bad! The mayors of towns and cities along the US-Mexican border are saying that the Mexican drug war "spill-over" into the US is being way over-stated by the media. ~ link (audio)

• "YouTube EDU Brings Free Education to the Masses" Hmmm... You might get some lectures on YouTube but I'm not sure that lectures are necessarily the same thing as an education. They might on occasion be a small component of an educational process but I'd hardly equate lectures with education. ~ link 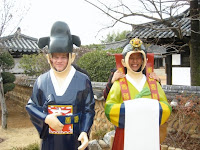 • We're excited. Cheryl and I made reservations tonight to fly to Seoul, 대한민국, for a weekend in April. Cost: 25,000 One-Pass miles each. (There are some definite advantages to living on the edge of Asia.) Kent will take the bus up from his small rural town in the south and meet up with us. He is the one on the left in the picture.

• Here is an idea with lots of POTential on Guam. KFC will be paying the city of Louisville, Kentucky $3,000 to fix 350 potholes. In exchange KFC will be allowed to paint over the filled holes with a stencil that reads, "Re-freshed by KFC." Creative. ~ link (audio)

• The Protestant idea of the "priesthood of all believers" isn't so much that each individual has direct access to God on his or her own (without a priestly intermediary) -- but that we're all called to serve as priests for each other.