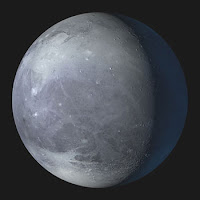 • The Illinois Senate, without anything more pressing on the docket, has passed a resolution declaring that Pluto is once again a planet and that March 13th is "Pluto Day." Okay. ~ link

"Kids from lower socioeconomic levels show brain physiology patterns similar to someone who actually had damage in the frontal lobe as an adult," said Robert Knight, director of the institute and a UC Berkeley professor of psychology. "We found that kids are more likely to have a low response if they have low socioeconomic status, though not everyone who is poor has low frontal lobe response..."

The researchers suspect that stressful environments and cognitive impoverishment are to blame, since in animals, stress and environmental deprivation have been shown to affect the prefrontal cortex. ~ link (thx)

• Apparently they're experiencing a clown shortage in the UK. ~ link

The Illinois Senate has way more sense than the International Astronomical Union has shown in two-and-a-half years. It’s the IAU who have acted like idiots, with one tiny group forcing a nonsensical planet definition on everyone. The truth is there is NO scientific consensus that Pluto is not a planet. The criterion requiring that a planet “clear the neighborhood of its orbit” is not only controversial; it’s so vague as to be meaningless. Only four percent of the IAU even voted on this, and the vote was driven by internal politics. A small group, most of whom are not planetary scientists, wanted to arbitrarily limit the number of planets to only the largest bodies in the solar system. They held their vote on the last day of a two-week conference with no absentee voting allowed. Their decision was immediately opposed by hundreds of professional astronomers in a formal petition led by Dr. Alan Stern, Principal Investigator of NASA’s New Horizons mission to Pluto.

Stern and like-minded scientists favor a broader definition of planet that includes any non-self-luminous spheroidal body orbiting a star. The spherical part is key because when objects become large enough, they are shaped by gravity, which pulls them into a round shape, rather than by chemical bonds. This is true of planets and not of shapeless asteroids and comets. And yes, it does make Ceres, Eris, Haumea, and Makemake planets as well, for a total of 13 planets in our solar system.

Even now, many astronomers and lay people are working to overturn the IAU demotion or are ignoring it altogether. Kudos to the Illinois Senate for standing up to this closed, out of touch organization whose leadership thinks they can just issue a decree and change reality.