• I am not in the least bit bothered when people earn lots and lots of money (especially if through the process they are directly and indirectly benefiting others in significant ways). Some people actually seem gifted 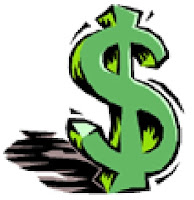 and called to that. However, we're being dishonest with ourselves, the rest of world, and history when we think of ourselves as the victimized poor. Yes, the economy is sluggish. Yes, government spending is out of control. Yes, the tax dollars are poorly managed. Yes, yes, yes -- but -- we're still blessed beyond what Solomon could have imagined. And yes we are still in a position to be a great blessing to others.

• "Don't wear yourself out trying to get rich. Be wise enough to know when to quit. In the blink of an eye wealth disappears, for it will sprout wings and fly away like an eagle." ~ Proverbs 23:4-5 (nlt)

• The recession could be long and severe, says the IMF, unless governments spend more money that they don't have. ~ BBC

• "Despite the economic downturn, more than half of actively religious donors plan to give the same or more to charitable causes in 2009 as they did last year, a new survey shows." ~ USA Today
Posted by Brad Boydston at 4/16/2009